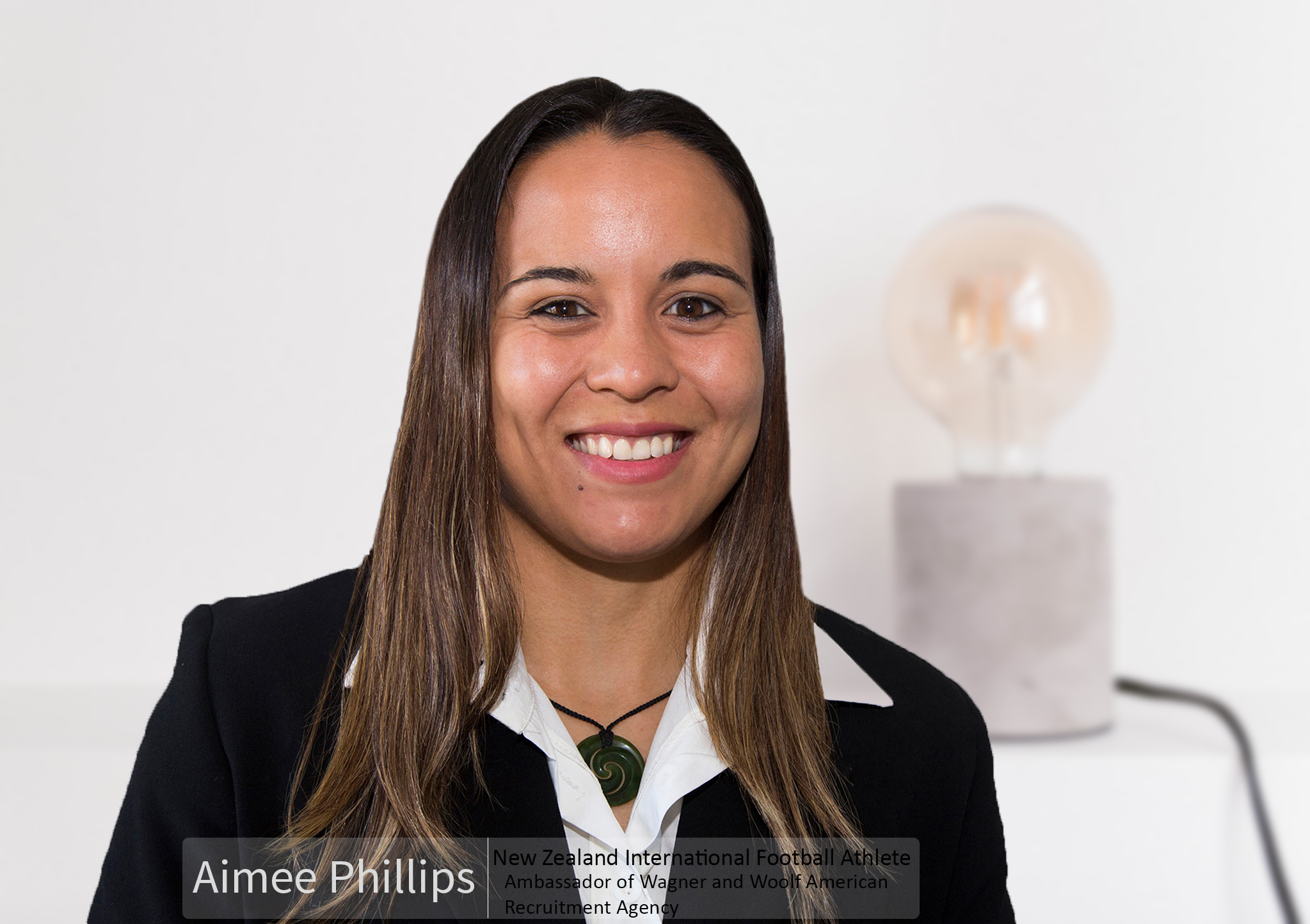 As a young girl Aimee attended St. Anne’s Catholic Primary School. During her time at St. Annes, she started to emerge as a natural leader and was awarded a Citizenship award for her kindness and responsibility at the school, most outstanding sportswoman, and overall academic and graduated with distinction.

Aimee attended high school at Catholic Cathedral College in Christchurch, New Zealand. During this time, her love for children and leadership continued to prosper leading her to acquire the role of Year 9 Prefect, Sports Captain and Deputy Head Girl. In 2008, Aimee graduated with Distinction, was awarded Proxime of the Dux and received an Emerging Leaders Scholarship to attend Canterbury University.

Aimee played for Canterbury United Pride (her region) from the age of 15-23 years of age. She will never forget the effort and time coaches and players have put into her development. Having suited up for Canterbury University and Western and the Pride. She was awarded Striker of the Year, Player of the Year and National Champions (3 titles) as well as other accolades in New Zealand.

“The only impossible journey is the one you never begin”

In 2009, Aimee studied towards a Bachelor of Teaching and Learning (Primary) and graduated in 2011. She then accepted a teaching role at Kirkwood Intermediate School. During her two years at Kirkwood Intermediate School, she took a leading role in sport, gained her full registration as a teacher and created advertising videos to promote the school as well as other opportunities.  Due to mentorship and the diversity of the school, Aimee applied for a TESSOL Fees Scholarship and was granted the scholarship in 2013.

In 2014, due to professional reasons she moved to Hornby High School. At this school, Aimee was a foundation member due to the Christchurch Earthquakes and was able to experience first hand “modern learning environments”.

“I have been scared so many times, I have felt uncomfortable forever, I have given up hope and questioned myself more than a million times, but I think it just got to the point where I said to myself…I feel the fear, I see it, I hate it but if I do not do this now, will I keep running all my life or will I know how to deal with it better when I have to face it again…So I started to learn to face it straight on”.

There she held a leadership unit for ICT website management, led Year 7/8 Sport and ESOL and taught a Year 8 Specialist Sports class.

In 2014, Aimee finished her Postgraduate Diploma of Education (endorsed in teaching and learning languages). She studied 4 Postgraduate papers part-time to make this possible. At the end of 2014, due to receiving invitations to trial for the New Zealand National Team, Aimee decided to leave her job and pursued her dream to play football professionally.


“Everyone was shocked when I gave up my job and my career, I really love teaching, I still do, they were shocked that I didn’t know what was going to happen, and I didn’t but I knew that it was better than living my life not knowing”
– Aimee Phillips


In 2015 she moved to Auckland, New Zealand and accepted a role at Edmund Hillary School in Papakura. At this school Aimee received professional development in Reading and Writing from the Ministry of Education. As well, Aimee was involved in coaching numerous sports teams and was a classroom teacher for Year 7/8. She ran the school Road Patrol programme that gained traction in the Papakura region. Click here to read the article.

In 2015, Aimee made the New Zealand National Team whilst playing for Forest Hill United and debuted in Brazil where the Football Ferns won 1-0. She was then carded as a high-performance athlete in 2016. Due to the carding opportunity Aimee stopped teaching full-time and moved to a role as relief teacher and professional football player.” Click here to read more.

“My dream was always to play the game I loved to the highest level possible, at that time I really did not think that it was possible to do such a thing for women”. “My mum was always asked the same thing”. “Is Aimee still playing soccer, when will she stop?” Sometimes I still get that now, and people try to tell me that I should be having kids and start a life”. “I don’t take it personally anymore”.

Whilst teaching opportunities were available, Aimee also started working as a scout for Northern Football, a promoter of brand partnerships for NZ Football and 5 + a day and accepted public speaking opportunities at schools to inspire and motivate others about their sporting and life journeys. From 2015-2017, Aimee was selected for a range of tours for the Football Ferns which included, the Olympic Qualifiers in Papua New Guinea and Algarve Cup.

In 2016 Aimee studied towards her Masters of Education (teaching and learning languages leadership) and graduated in 2017 with merit.  In 2018, Aimee decided to look abroad to play due to limited game time and minutes for her National Team. She landed her first professional contract in Serbia where she appeared 9 times and scored 6 goals. ZFK Spartak Subotica gained the Serbian Championship.

“Life is either a daring adventure or nothing at all.”

In 2019, Aimee moved to Sydney to play for The Northern Tigers FC in the Australia NPL (she has made 18 appearances and scored twice). In March 2019, Aimee was chosen for the squad to represent New Zealand in the Cup of Nations and suited for her country two out of three games. She was included in the New Zealand Football Squad to play Norway in April 2019 and did not make the final World Cup Squad which was announced in May 2019. New Zealand did not progress through.

In 2020, Aimee signed for Bankstown FC Lions and was named Captain and U15’s Head Coach for the girls playing in NPL1. Due to professional reasons, Aimee transferred to Sydney Olympic and was fortunate enough to play the semi final against Many where she scored; Sydney Olympic lost 2-1 see the report here and reported by Manly United for more details: https://www.manlyunitedfc.com.au/2020/10/06/manly-prevail-in-semi-final-thriller/.

Aimee is currently located in Sydney, Australia and is involved in these roles: